Julia: Kim & Lee, we’ve been really enjoying your new record — it’s so stylistically diverse, everything from 50s/60’s garage rock, to a few almost Gypsy-jazz tracks in the mix. Where was your starting place?

I found that as a guitarist — well, initially, it’s harder. If you’re a guitarist who writes, it’s better than being a guitarist who doesn’t write, cos you’ve got kind of a Thing — you’ve got something of your own. Obviously you can have your own style on the guitar. But we’ve got two things of our own.

Lee: Or three, if you count me on the bass. (laughter)

L: Basically, when Kimberley writes, he writes all the time. Whenever inspiration takes him, he writes something. And when he’s got a few, he’ll bring them to me, and we’ll kinda go through them. We’ve worked that out in the twenty years we’ve been together.

Occasionally I’ll get an inspiration, and something will come to me and Kimberley will say, “Hey, yeah, let’s put that one in as well.” But he’s the one who does most of the writing, as you’d expect.

J: Lee, I did notice that you wrote one of my favourite tracks on here, “Backing Singer Blues” — that’s quite brilliant.

K: It jumps out, and it gets picked out!

L: That’s very nice for me, actually, to find that that happens, because, you know, Kimberley is an award-winning songwriter, but mine gets picked out, and that’s really nice. I actually was watching a music programme when I got the inspiration for that one. I could see there was a main singer, and there were some really good backing singers. And I’m thinking, there must be at least one of those backing singers who wishes that they were singing up at the front, not at the back… I’m glad you like that one, that’s made me very happy. 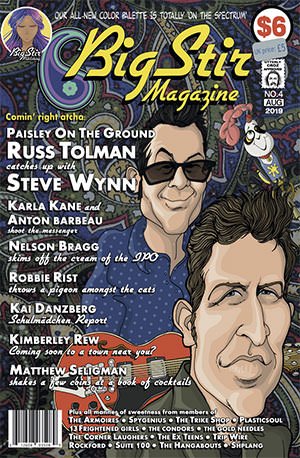 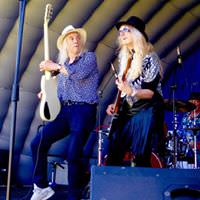 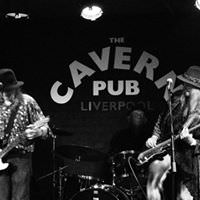 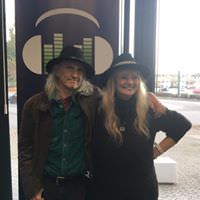 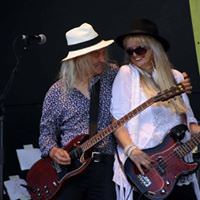 L: We actually have two at the moment, one called Bo, and the other called Diddley. We got them last March — they were born on New Years’ Day, 2018, so we’ve had them just over a year. One’s black and white, that’s Bo, and the other’s a tabby, and that’s Diddley. They rule the house. Bo came up and yelled at me this morning to get out of bed. (laughter)

J: As they do… they must have been very proud to have made it in a song!

L: We’ve got quite a few cat songs, actually. We’re working on a new album, and it’s got two cat ones on it…

K: Yeah, we’re up to two cat songs per album. It’s getting towards a concept.

K: Yeah – there’s a Kimberley Rew album called Miles of Smiles, and you know when you’re doing a gig and you have the merch table, there’s maybe half a dozen albums — and the one that always gets the most attention is the one with a picture of the cat on the front. So we thought we’ll just call the next album “Cute Fluffy Kittens,” and we’ll sell trillions of albums. It’s our sales strategy.

J: There’s a universal truth to that! I had to ask you about the cat song because our cat Rosie is sitting here right next to me, and she would expect that.

L: They all are — you have to say that about cats! They are all unique individuals.

J: She’s had at least one song written about her, a single on the Big Stir record label — “Jah Rosie, the Dainty Beast.” It’s very circular, everybody and their cats!

L: Excellent, I’ll have to take a look for that! J: So Kim & Lee, when you were kids, what did you grow up listening to? What were the things that burrowed their way into your ears early on in life?

L: Well, Kimberley is just a little bit older than me, so we had slightly different influences on what we listened to. At the time it was very much what was in the charts, and that was basically all you got to hear. You didn’t really hear what happened five years ago, much. Not like now, where you get to hear everything from everywhere, always. Whereas at that time, you were very much restricted to what you could get hold of. I’m gonna let Kimberley tell you what he started with, and then I’ll tell you what I started with.

K: I mean, I’m very lucky — I was just the right age. When you’re 10 or 11 years old — everything you hear for the first time is formative, and everything is desperately important. Everything is a matter of life and death, and it enters your soul, and that’s the way it HAS to be for the rest of your life. It still is, and I don’t think that’s gonna change.

L: Probably the first thing that entered my soul was when I was in the car with my dad, and the Beatles came on — I didn’t know who they were. I said to my dad, “This is great, what’s this?” And he said, “It’s rubbish!” and turned it over! (Laughter) So I think the Beatles probably was the first thing. I was probably younger at the time. They definitely made an impression.

J: I was just talking to my parents the other day about that — how when they were kids, they didn’t listen to their parents’ music, but my friends and I grew up listening to the Beatles and the Stones, and digging through our parents’ record collections. Somewhere in there, something really changed, so that we’re still listening to that music now.

K: Well, what we had was the first and only generation gap — where the taste of the younger generation changed, and there was a revolution in taste. The older people hated the young peoples’ music, and vice versa. And they were fiercely defensive of their own music. That quarrel has become a much more kind of mix-and-match these days, I get the impression. Younger people can try and be original, although that seems to be more difficult than it used to be, or they can dip into the past.

L: I think of Tom Jones, as an example — he originally started off as part of my parents’ generation of music, but then he’s kind of got cool, hasn’t he?

K: He’s made that very rare journey, from uncool to cool. It’s much easier going the other direction! J: Are there any artists or bands or music that you’re really into now that would surprise people who know your work, that people wouldn’t expect?

K: I think I know where you’re coming from. My name, actually, is a kind of admission ticket to a certain group of people — like, the Soft Boys — and that seems to extend to a power-pop subculture which you have over there [in the US], but I don’t think we have that so much over here [in the UK]. And then that is more to do with lesser-known bands. I think my only really lesser-known band is Kim & Lee. I’m quite mainstream in my taste, I’ve got the Beatles and the Rolling Stones, I’ve got classic blues… Muddy Waters, Howling Wolf, Bo Diddley, Chuck Berry, I’ve got all that. I’ve got the Kinks, I’ve got the Who, Bill Withers, the Doors, ZZ Top…

L: But we also get to hear get to hear quite a lot of the young people in the area’s music as well, because we’re involved in the local scene. So, we often get albums from local people — we do tend, really, to listen to people who aren’t famous, just ones who are local. And that’s really great, because there are some really, really good musicians. I mean, there are always good musicians in everybody’s local location, if they choose to go and find them. And certainly we’re very lucky — we get to meet an awful lot of fantastic musicians in the Cambridge area. We don’t tend to buy albums because we’re given loads! It’s wonderful. Free music, it’s great!

J: What’s on your CD or record player right now?

K: Sunlight For Honey… have a listen, look them up.

L: And then there’s Jo Ash, a very lovely lady singer, a bit like Kate Bush. And also Claudia McKenzie and Fourth Labyrinth, locals bands that are doing well. So, yeah… we’re very much in the scene.

K: So, please consider that a link established from you to Cambridge, UK! J: I would be remiss in my duties as an interviewer for a power-pop magazine if I didn’t ask you, Kim, about “Walking on Sunshine.” Is that something you like to talk about now, or is the past in the past?

K: I don’t really have any skeletons in my closet, no! It was huge part of my life, and it still is. I’m very conscious of the fact that there are a lot of people who’ve worked very hard in their musical existence and been less well-rewarded for it than I have.

L: And we occasionally play it, don’t we.

K: Yeah, it’s Katrina’s birthday tomorrow, so we’ll be singing “Walking On Sunshine” tomorrow. Also, we play it at Christmas —that sort of discourages people from requesting it most of the rest of the year!

L: And we’re also very grateful to it. It makes people happy, and it’s made us happy. Even the drums just starting it off — you’ve got a little happiness going on.

J: Did something tell you at the time — did you know it was going to be that kind of hit?

K: No. I’ve never really been that much in control of my life, where I’ve been writing a song, or negotiating with a band to rehearse a song or record a song, where I’ve really known where I was going. Whether it would be recorded, and whether we’d get a deal with a major record company…. Like, none of that has been a calculated kind of plan. If it was, I’d probably do it all the time. At least it happened once! J: Some things are just that kind of magic! Lee, how did you pick up the bass? That’s not the most common instrument for women in rock music, certainly.

L: Well, growing up, I liked to dance a lot. I got to about 15 and I thought, well, I’ve never been trained, so I can’t do that for a living. So, what else… what’s equivalent to dancing? It’s got to be something to do with music. So I thought, if I can’t dance to it, then I’ll play it. I listened to what I was dancing to, and it was between the drums and the bass. And funnily enough, there was a track by Alice Cooper called “Halo of Flies,” and in the middle of that track, there’s a fantastic part where the drummer does a solo over the bass keeping the rhythm, and I thought, bass is the instrument for me. That’s where it came from. So it’s absolutely my instrument, and that’s how I identify myself, as a bass player. Everything in my life that I have is down to that little decision when I was, like, 17.

J: Wow. Well, the two of you have such a wonderful interplay together, and on this record — you can just feel that, like a conversation running back and forth.

L: It drives us, it keeps our relationship fresh and happy and growing, all the time. And we love our life together, don’t we. It’s great, fantastic. Love is where it’s at, man. Yeah, I’m still a hippie!

K: I’d just like to say hello to everybody over in the US. There’s been a really faithful bunch of people that have remembered me from — actually, now, it’s now 40-plus years. And much of that time, I’ve given them very little, apart from what become increasingly distant memories. Jumping right in and picking up the thread…